When I was in Haridwar – Part 3

Today again, we woke-up by the same mantras and devotional music. Today we decided to go for Rishikesh. The Yoga Capital of the world. We went to taxi stand. All Taxi guys were charging heavy amount so we thought to go by other transport but meanwhile we searched an old taxi guy with nominal price. We hired him and kicked-off for Rishikesh. Rishikesh is 2-3 hours journey from Haridwar. Road was pretty good and driver himself was a nice fellow who seems bit unhappy with the politicians. He said – Sir !!! If our politicians would become good, our state will be automatically good state. All these mismanagement you are looking is just because of politicians. Nobody is here who have time to listen our problems. Actually, He was right so we were moving our head into yes.
We reached Raishikesh with his non-stop chating.  He dropped us bit far from Laxman Jhoola and said – I cannot go ahead. You can roam around then back to Ram Jhoola where I will pick you up, and then he moved. After a short walk Laxman Jhoola, iron suspension bridge constructed in 1939, was in front of my eyes. Yet again, many childhood memories knocked my mind. Laxman Jhoola was the place where I did lots fun in my childhood but now the bridge was not busy like those days because one more bridge called Ram Jhoola has constructed. Only few foreigners and sadhus (Hermits) were strolling there. Though the Ganga was cover up with the layer of fog but still the scenario of Ganga was very spectacular from here. Huge Daksheshwar Temple was also shining below the bridge. We stood there and enjoyed cold breeze, which calmed us from sweltering heat. When I used to come here in my childhood, bridge swung little fast but now it was not swinging like those days. After strolling on bridge, we decided to go to Geeta Ashram, which is near to Ram Jhoola. 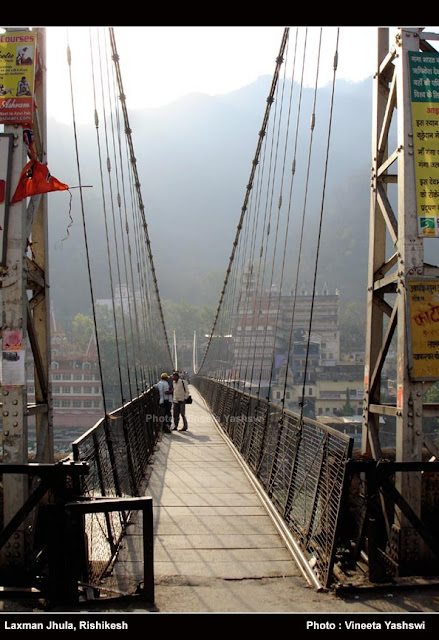 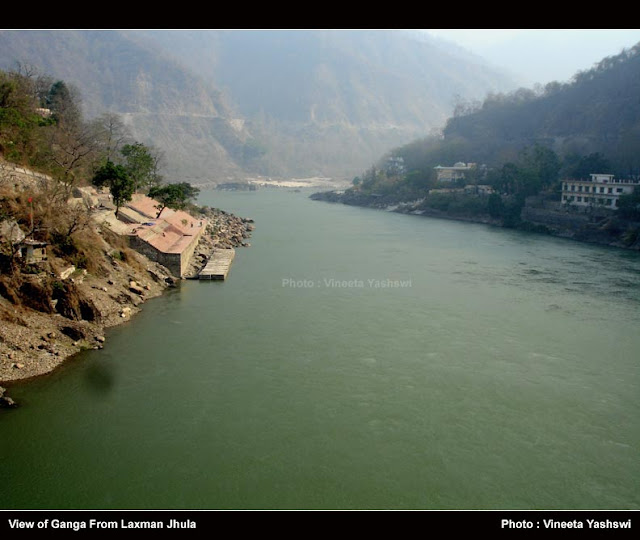 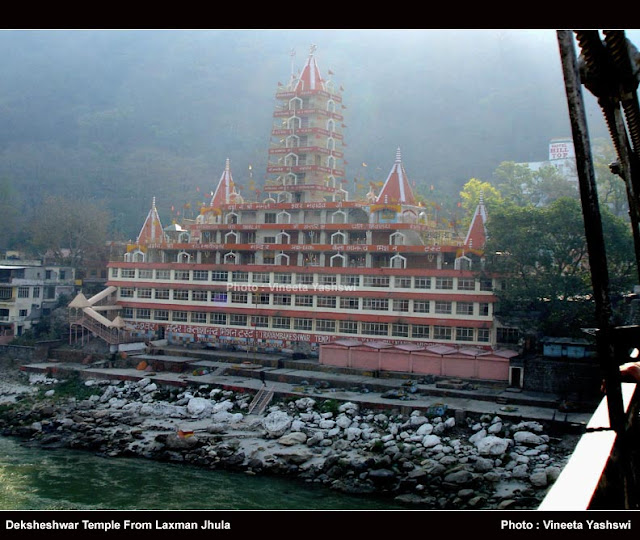 When we were moving to Geeta Ashram, we saw Dhaba so thought to have breakfast. There we met with some local guys. We ordered for smaosa and chai.  One guy ask - where from you are ?  I said – We too belong to Uttarakhand. Don’t know what happened to him, he directly said with angriness – uuuhh Uttarakhand. We were happy in Uttar Pradesh. In Uttarakhand, we don’t have employment but Politicians’ Red Light Cars are increasing which runs all the time with irritating siren. God knows what they do but our problems are still there and can you imagine in interior areas, tradition of liquor is escalating day by day. Meanwhile Dhaba wala brought us tea and samosa. We had our breakfast with those local guys and moved to Geeta Ashram. Though taxi services were also available in seat sharing basis but as it was only 2 km. so we preferred walk. 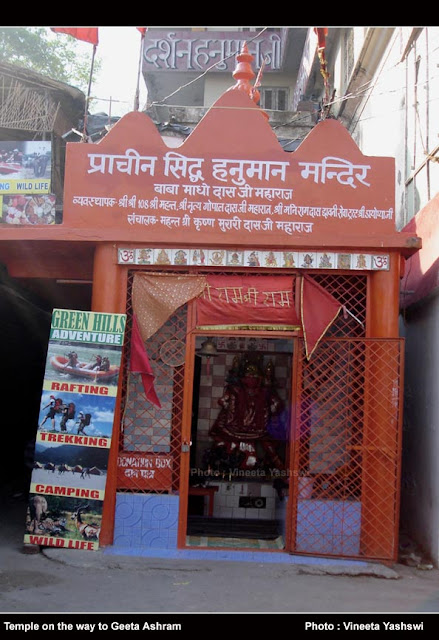 Here I found many foreigners behaving like Indian sadhus. They came here in search of peace and inner pleasure, which at least I could not found anywhere. It was morning and people were busy in doing their daily work like yoga in the bank of Ganga, Some were taking holy dip in Ganga. Baggers and painted sadhus were asking for money. Some national-international devotees were out of this world. They don’t need anything; some of them were smoking as we came to know is Ganja. On this road many Ashrams can be seen, where devotees, many of them are foreigners, goes to seek out peace and learn yoga, Meditation.  After half an hour, we were at Swargashram, just before Geeta Ashram. Bengali, tourists were strolling inside and were busy taking pictures. 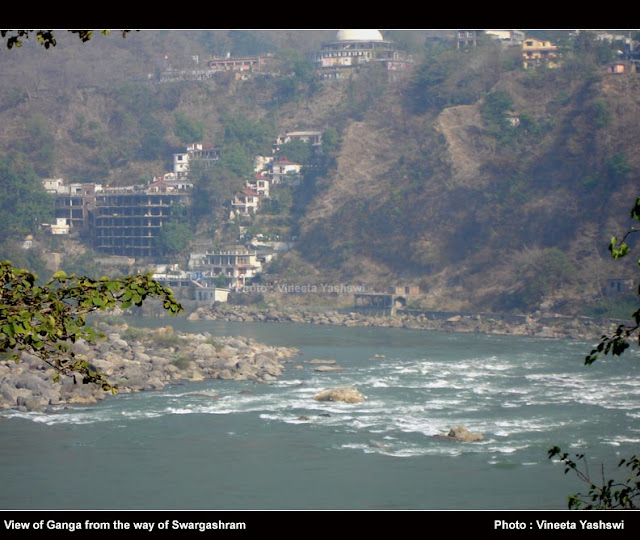 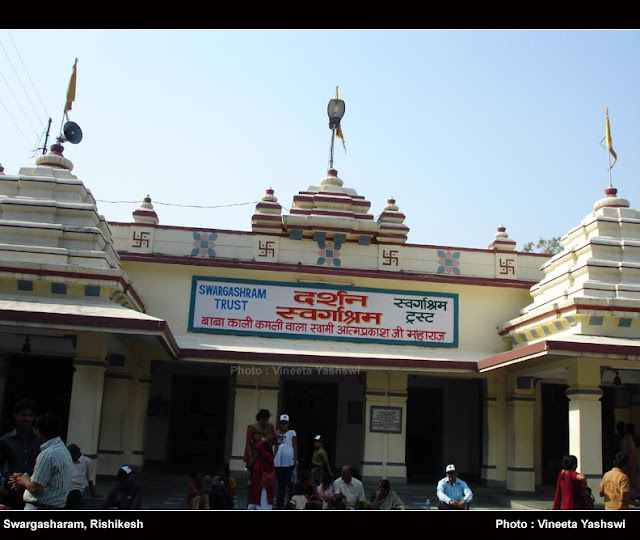 From Swargashram we moved to Geeta Ashram. Here again Sadhus, most of them were foreigners, were busy with smoking as far as I concern was Ganja. Well we went inside for a while and then back. Ram Jhoola was just in front of Geeta Ashram, which was engaged with lots activities. Well we spend some time here and then took a narrow path, where many huge and small temples had situated. One more thing, which again seeks my attention, was dirt. Between those small and big temples lots restaurants and other shops were also available. I saw Chotiwal restaurant, Haridwar's famous restaurant, once they used serve food in dry leaves plate (Pattal) but now it has changed so I had no craze for this restaurant like that time I had but the statue of Chotiwala, who were carrying BHOJANTHAAL (Plate of food), was very interesting.  When we were striding along with Ganga Ghat, one White stone Shiva statue attracted me a lot. 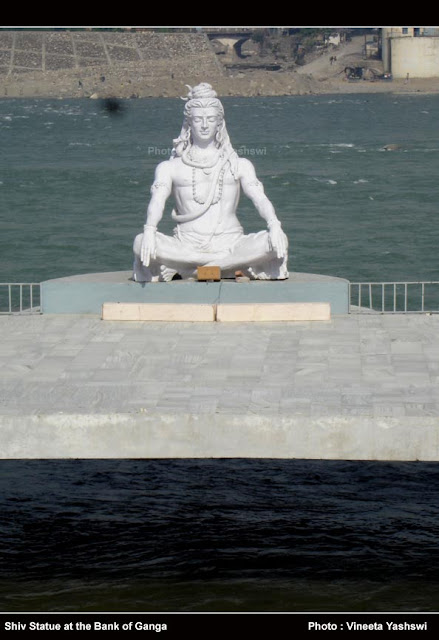 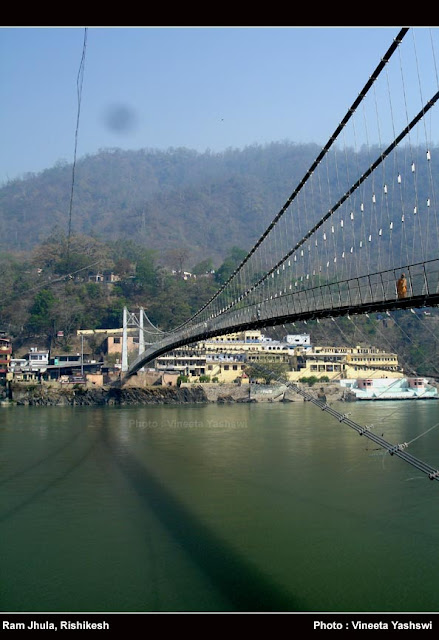 In Rishikesh, Ganga seems in a different mood. Here Ganga was more calm and more wider then Haridwar. It was good experience to see Ganga in this mood. Some water games were also going on there. We wandered in Ghat for a while and then back to other end of Ram Jhoola, where our taxi driver was waiting for us. By that time temperature became hot and heat strokes were very fast. On the way to Haridwar, our driver told us about Jain temple. Though, temple was new but the architect of temple was quite attractive and elegant. When we entered in the temple, a lady, who wore a Jain dress, told us in a very loving way – don’t take pictures inside but you can take pictures outside. We strolled and after taking some pictures, we came back. 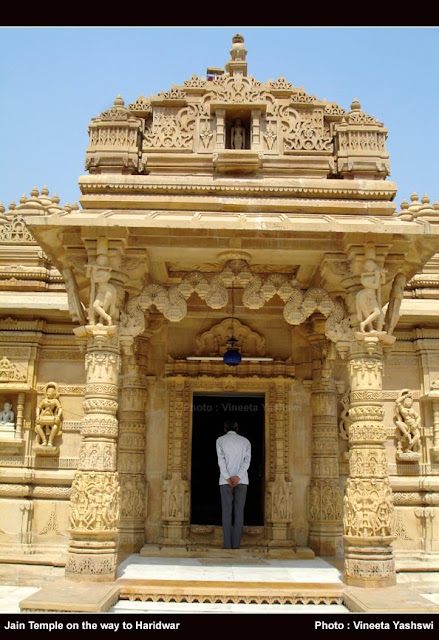 After half an hour later, we were at Haridwar taxi stand. We asked driver for good restaurant. He told us one restaurant, which was neat and clean with some wood benches and tables. We ordered for lunch and within 20 mints, we were delighting by simple and tasty food.  Same time we decided that we will come here for dinner again.
After lunch, we moved to hotel through the market. This market was sweet market and shops stuffed with many fresh and mouth-watering sweets. One shop attracted me a lot because of the bell he hung in front of his shop. He was pulling it and saying – Aaiye Prabhu ! Seva Ka Avasr Dijiye. (God ! Please come, give me a chance for service). We thought, if somebody is calling then we must go and give him chance to serve us…so we entered the shop and ordered one plate Gulab Jamun.  He brought Gulab Jmun in dona (dry leaves bowl). Gulab Jamun was damn yummy but I was impressed by the way he served Gulab Jamun. At least something is still alive somewhere. On this note, we ordered one more plate of Gulab Jamun. In roasting heat we had only one option to back to hotel. So we turned to our room through this long delicious market… 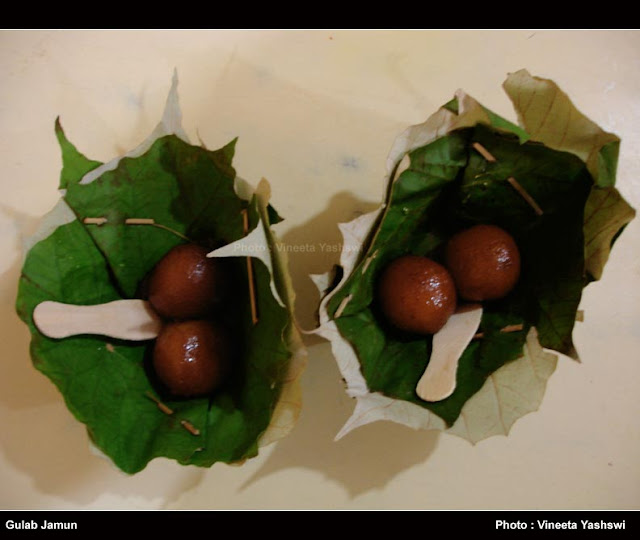 Continue…
Posted By Vineeta Yashsavi at 21:19