When I was in Kausani - Part 1

I had this journey in 2006. Me and my friends planned this trip in a hurry. Actually, we had two days off so we decided to go some suitable and beautiful destination and then we thought about Kausani. After our final planning, we booked K.M.V.N. rest house for our stay. Kausani is situated in the Bageshwar of the Uttarakhand State. The altitude of Kausani is about 1890mts. From Kausani many Himalayan Peaks like Trishul, Nanda Devi and Panchahuli can bee seen easily. Mahatma Gandhi called this place the ‘Switzerland of India’. 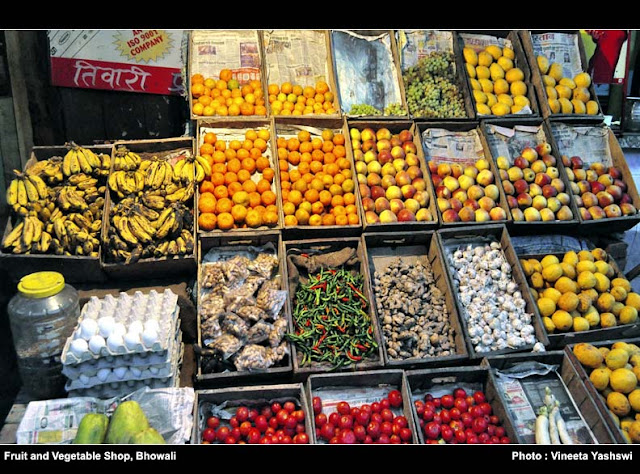 Month was perhaps October or November. Eerily morning 6.30 we set off for the Kausani. By all good luck, we found direct bus for Kausani. We took tickets and start chattering. After a while bus moved to Bhowali, a town with a small market. Around 25-30 minutes, we were at Bhowali and From Bhowali, we set off to the Almora. This route was well known for me. This road goes along with a Kosi river. We crossed Garampani, and after Garampani  another small town, Kanchi Ashram, Kakrighat and Somvargiri Maharaj Ashram. Water level of Kosi was very low. In fact, it was almost dry. Around 10.00 A.M. we were at Almora. 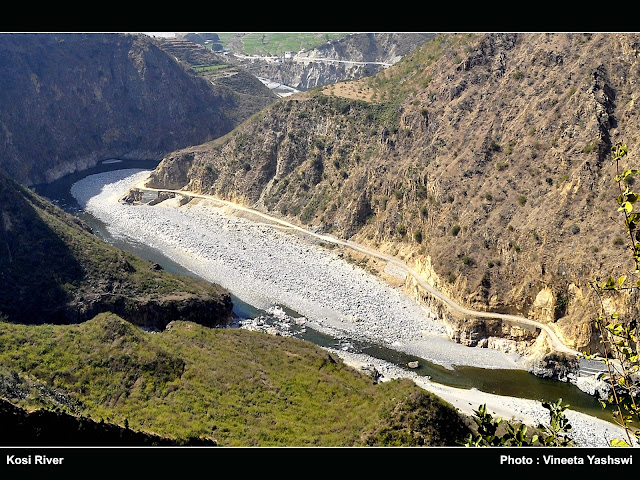 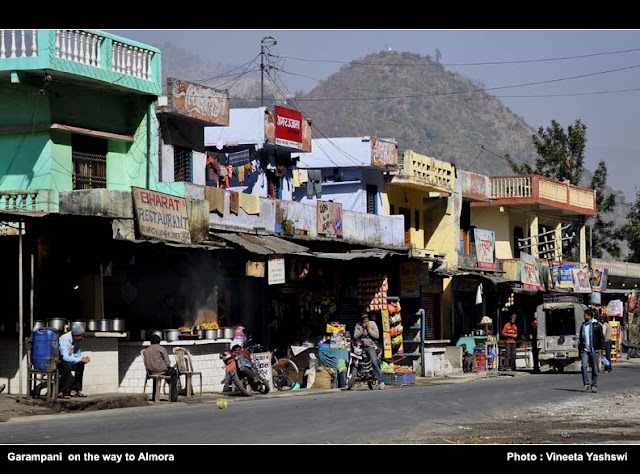 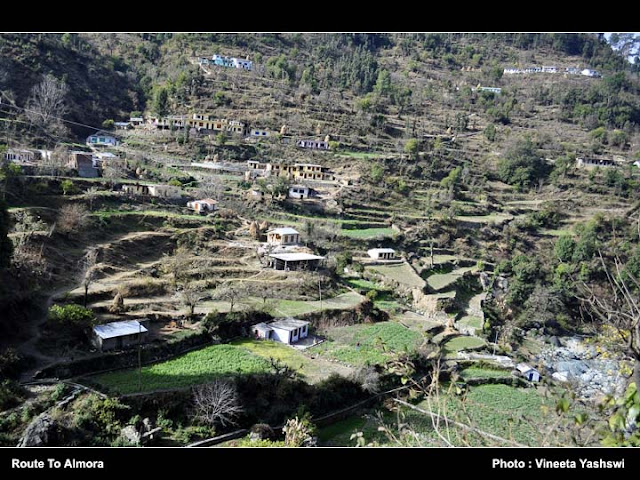 From here, we start our journey for Kausani. This route was utterly new for all of us. So many small and beautiful villages were on this route. I forgot the name of those villages now but the whole valley was very stunning. I was gazing out and imagining that everything was moving with us. New villages were appearing one after one. On this route, we crossed the Someshwer Valley, which is beautiful and historical place.

Slowly - slowly bus was moving forward and stopping to drop and pickup the passengers only. On the whole journey, bus stopped only one place for tea and breakfast. Weather was pleasant. It was not very hot, not very cold. After 15 minutes rest, bus starts for next destination, which was Kausani.

Around 12.00 noon, bus dropped us at small market of Kausani. We went in a shop and asked for K.M.V.N. rest house. Shopkeeper told, only taxi goes there and will charge 50 bucks. We took a taxi and set off for the rest house. After 20-25 minutes, we were at rest house. We already had our booking so after some formalities, we entered in room. In front of our room, the mesmerizing view of Himalaya was seeking our attention, though, it was covered in clouds. We called for a coffee and had it with the majestic view of Himalaya. Those moments were magical and after those magical moments, time to pamper our hunger so we ordered for lunch. After lunch, we lie down and decided to go for a walk at evening.

At the evening around 4.30 we went for a walk. Scenario of Kausani was change this time and was looking spectacular. Manager told us – we cannot go elsewhere this time except market because all places would have closed by this time. So we took walk to the market. Manager alerts us and said – don’t go anywhere else coz its evening and soon it will get dark, which can be dangerous for us.

When we were walking, we met with many foreigners. Their behavior showing, that they knows everything about the place. Weather was slightly cold but not chilled so it was enjoyable. When we were walking, we found that rest house was only 2 km. walk from market, which is good walking distance. It was sunset and market of Kausani had closed. Only few shops were open but not for people like us. Only for those who love to have some drink… So we thought it would be good to get back. When we were returning we saw a small PAHARI dhaba. Restaurant was good means no one was drinking there so we went in and asked for a tea. Restaurant guy said, he would make a ginger tea for us. We came out and set in verandah where wood fire was burning. It was marvelous experience to sit in front of wood fire coz in cites this luxury is unaffordable. Same time some village people came to us. They wanted to know about us. We said - We are also Pahari. They said – Now mostly Bangali come here. I asked – but we saw many foreigners here. They said – actually, they are foreigners but now turn into Pahari. Many of them have settled here and completely adopted our culture. They can speak Hindi and our regional language Kumauni with full command.

We were indulge in our discussion meanwhile restaurant wala brought us tea. We took a sip and our reactions were like woooow… Tea was yummy and same time we decided, we would take tea here only. After finishing tea, we said goodbye to those guys and back to rest house. It had been extremely dark by this time. All of a sudden, I saw the sky and it was astonishing. Clear blue sky was dazzling with stars, which were looking like small diamonds. We didn’t wanna miss that chance so for few moments we just stood there, looking at the nature's spectacle. Now a days this sort of sky can be seen only in villages because cities are so polluted that it's next to impossible to see bright and clear blue sky. We were so deeply engrossed with it and forgot that we have to go back to rest house. After a long time we realized that, we have to move now. We were in our mood and don’t know when we took a wrong turn. Suddenly we realized that we are going inside the jungle. It was deep silence there and no people were to be seen anywhere. We couldn’t understand from where we took a wrong path. No one was there whom we asked for a right path and we don’t have our mobiles with us so we cannot call to rest house and asked for the right path. That time we were really terrified. After a while, we decided that we'll go back to the same route and there we can ask for rest house. It was very hushed. Eventually, we were at main road. Now we realized our mistake. Actually, what happened, the rode was divided there and we couldn’t see the main road and went in wrong way, which was going into the jungle. Well we were stress-free when we find a right way. After a 10 minutes' walk we were at our rest house.

At night, it was lonely. We took our dinner in our room and after a short talk; we went to sleep in nature lap…

Continue…
Posted By Vineeta Yashsavi at 14:49

Email ThisBlogThis!Share to TwitterShare to FacebookShare to Pinterest
Labels: My Travel Notes From Kausnai