Pictures From My Haridwar Trip

Some more pictures from my Haridwar Trip... 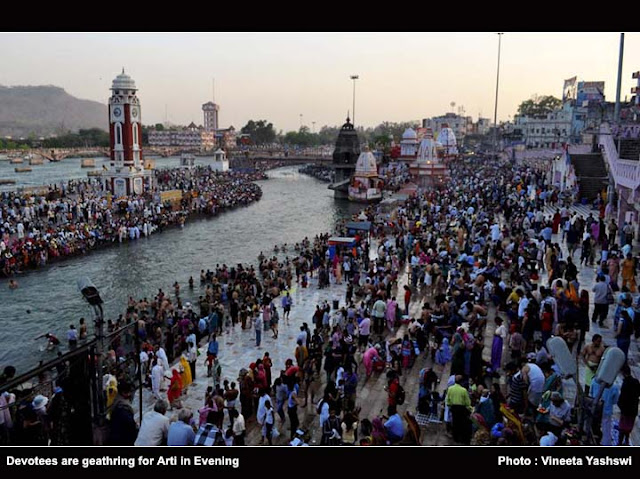 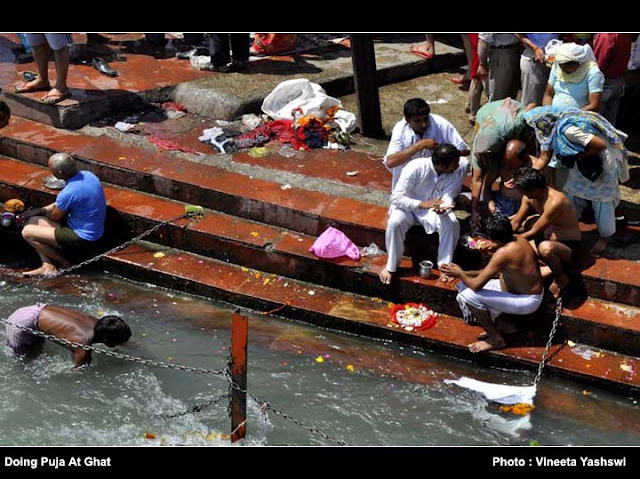 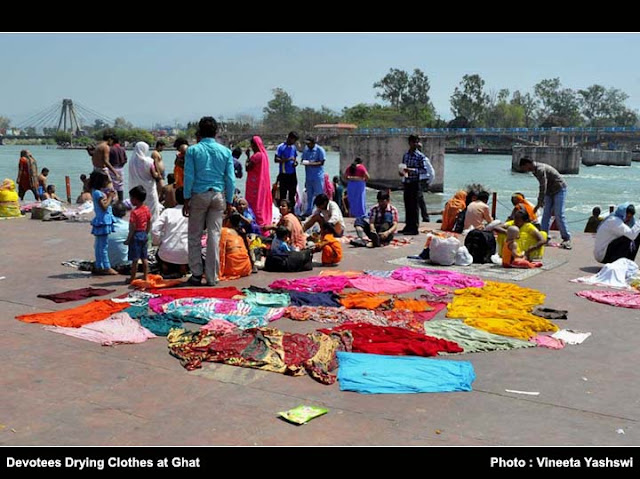 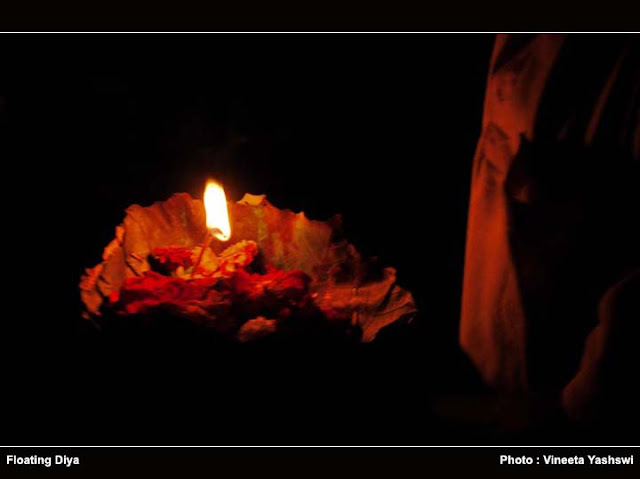 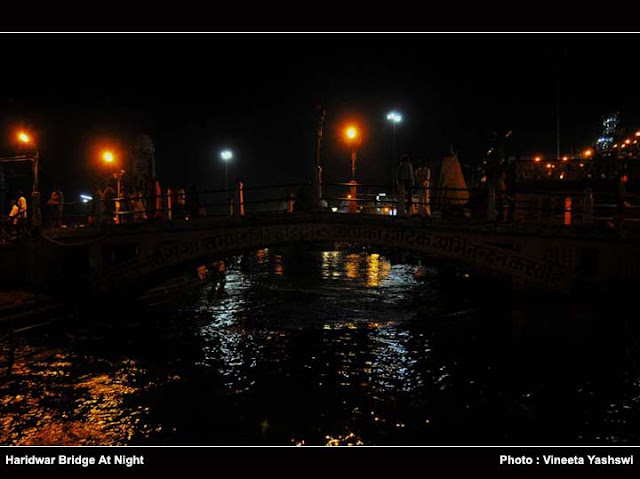 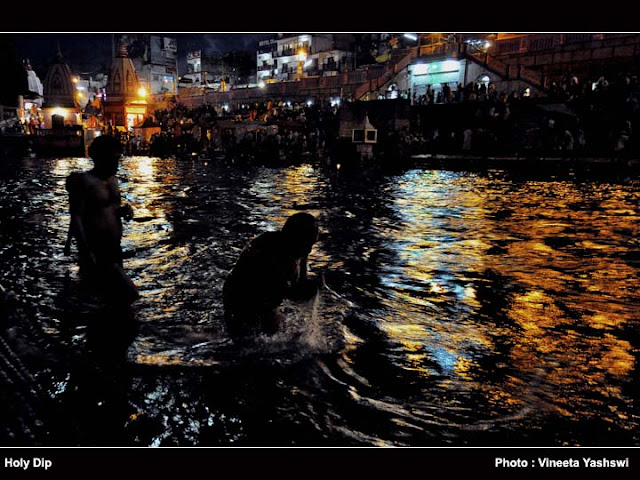 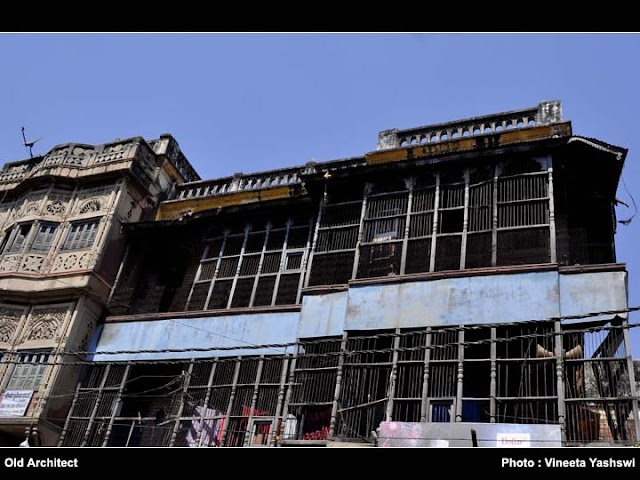 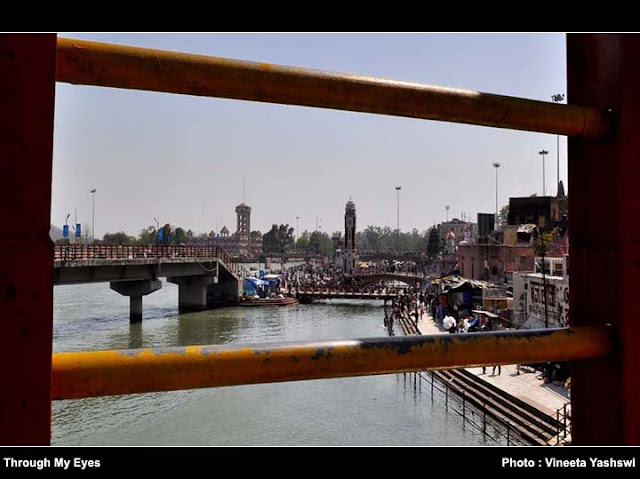 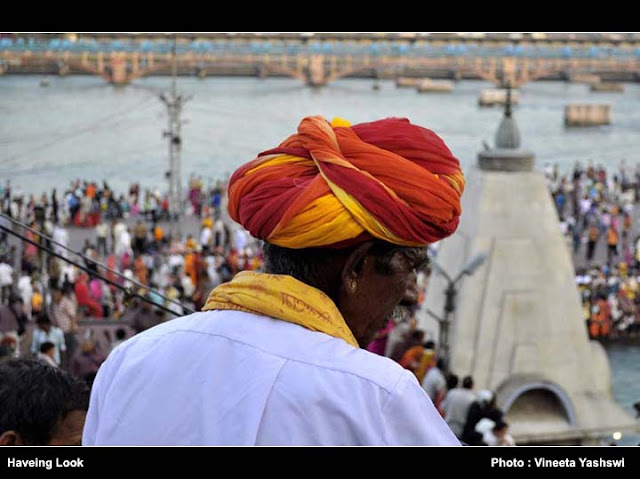 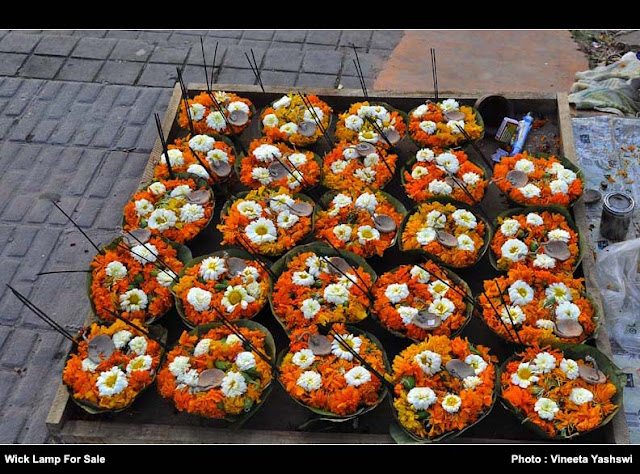 When I Was In Haridwar - Part 4

At evening, we moved market little early so that we could stroll at the market and roam around some other Ghat as well. When we headed to market, we stopped in Thandais' (Cold Drink) shop. Though we were watching those shops since first day but as we thought, these shops would be Bhang shops (homemade charas kind of stuff) so we avoided them but today someone told that this Thandai is like herbal cold drink, which can be drink without any tension so we entered in Thandai shop. Method of making this Thandai was absolutely traditional. Shopkeeper collected all the herbs in a stone bowl, and messed them with long cylindrical wood. On the top of this cylindrical wood one rattle kind of stuff was hanging. When he was mixing all the herbs with wood, rattle was making attractive sound. It was new thing and full of flavor too. 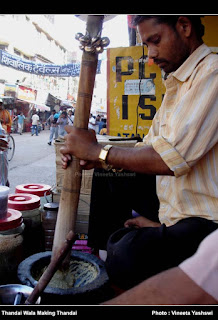 After this appetizing drink, time for moved to market, which was polluting with all kind of noise, fume, dust etc... In one shop, where household paraphernalia were selling, I saw plastic made Nimbu Mircha (it made by natural Nimbu mircha and says, it stops bad thing to enter inside house) to hang on the door. I asked to the shopkeeper – are people buy them ? He said – these are highly saleable coz in today's busy life no one have such a time to change real Nimbu Mircha every day. I was stunned to see that in this modern age all these mambo- jumbo has also commercialized and people are becoming more and more superstitious.  Well I did not need this but I could not stop myself to take picture. 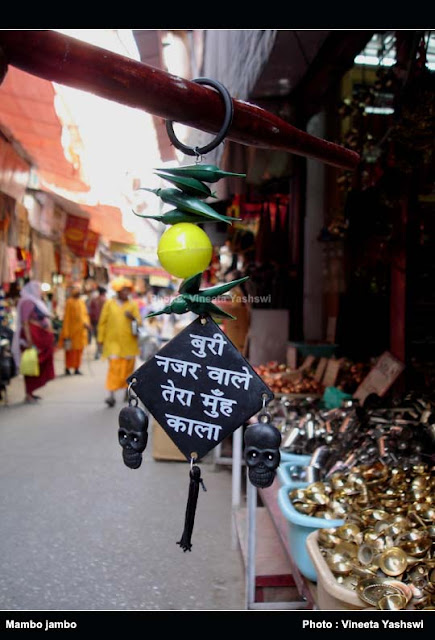 Now almost old architect Dharmshala (Inn) has been converted into modern style hotels but few old architect Dharamshala can be seen somewhere, which looks like ghost house more than guest house. From here, we went to Birla Ghat. Ghat was not messy like Her-ki-Pouri. People were sitting in the bank of Ghat and staring Ganga. Here also many small and big temples are located. After sitting for some time, we went to other end of Ghat. It is my very strong faith about Haridwar that no one could die with hunger here coz people has searched many work to survive like cleaning the ears, selling garlands, flower, cotton, plastic sheets to sit, shaving people in open and collecting sand, stone and coins from Ganga etc etc... I saw some kids were collecting coconut from river, which floated in Ganga by the devotees. I think, In India, financial problems couldn't effect easily because people have many self-employment options. 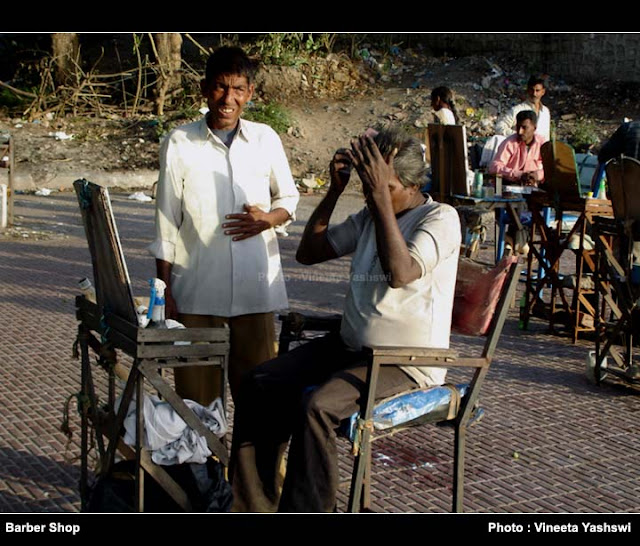 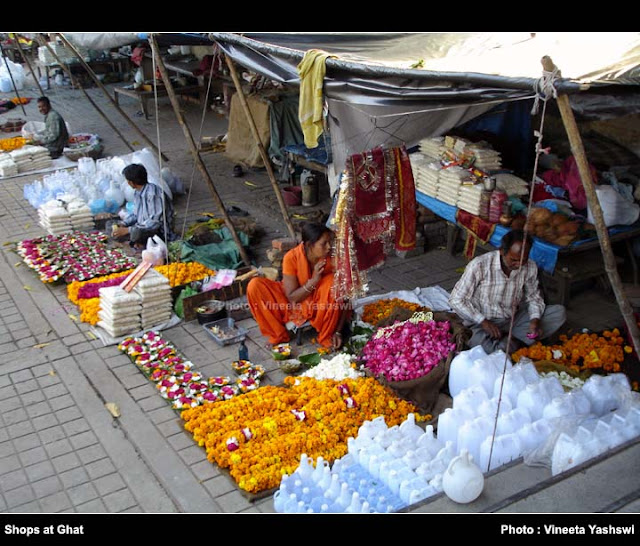 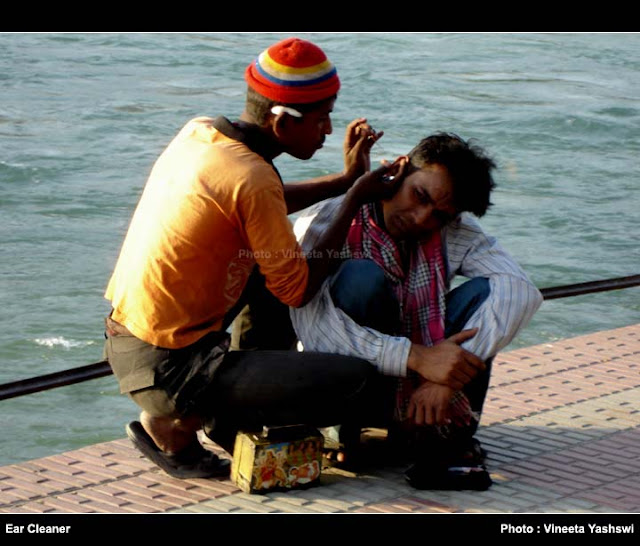 We were moving towards Her-Ki-Pauri through different Ghat. One of them was Gau Ghat (Cow) and below the name of this Ghat, one elephant statue was there which was quite funny. Well we reached Her-Ki-Pouri where devotees were collecting for Arti.  Today again, we searched a good place for Arti. Scenario of Ganga has utterly changed and floating diyas were increasing this hundred times. After Arti we went to market had dinner in same restaurant and back to hotel. 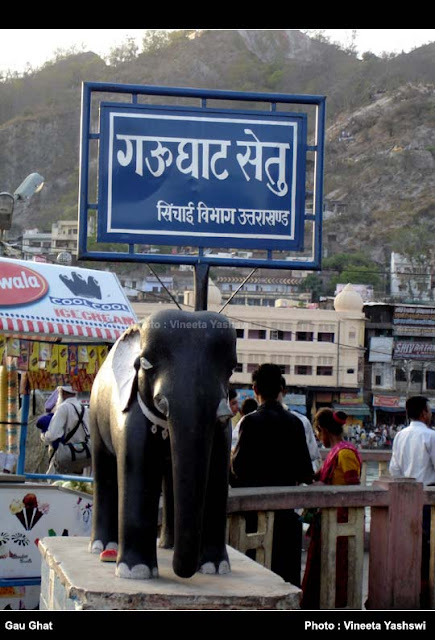 Next morning we decided to go to Kankhal. We called the same taxi driver who came with us to Rishikesh. Myth about Kankhal is that Raja Daksh organized yagya and called every god and goddess but he did not call his sun-in-low Shiva. Sati, daughter of raja Daksha and wife of Shiva, couldn't tolerate disrespect of her husband and jumped on this Yagya vedi (altar) to committed suicide. After this, Shiva holds her body and start Tandav Nartya (dance with deep anger). It says, the places where her body parts fall down become Shaktipeeth, most sacred places for Hindu.  Temples of Kankhal was very huge. Outside the temple, one graveyard situated, but I couldn’t get any knowledge about this. From here, we went to Anand Mai temple, which is in short distance from temple, here one can get real peace. When we were turning to Haridwar, we saw one more temple called Pardeshwar Mahadev's temple. We entered the temple. Temple was good but the special thing I saw here was Rudraksh tree, which I was watching first time. In the surrounding of this tree, I saw many big and small size Shivlings. 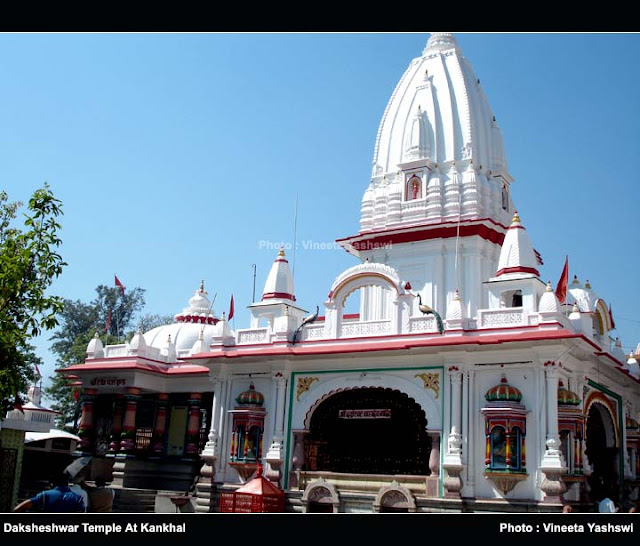 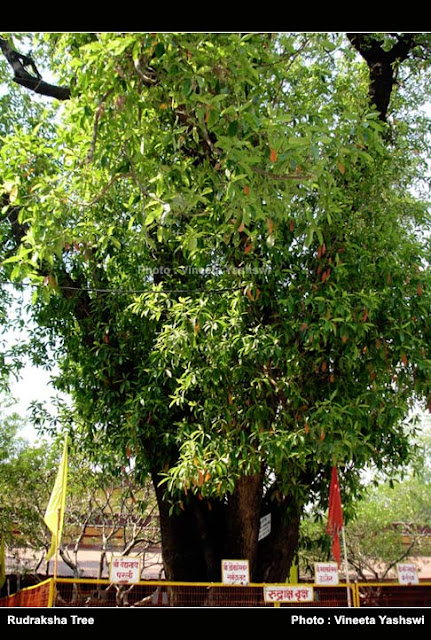 When we came out from here, my friend saw Nankhatai wala (sort of biscuits) and shouted like a child – Naaaankhatai walaaaaa. Nowadays it has almost vanished. In my childhood, I used to eat them very often. After that, we bought some Nankhatai. I tasted first time and it was simply delicious. 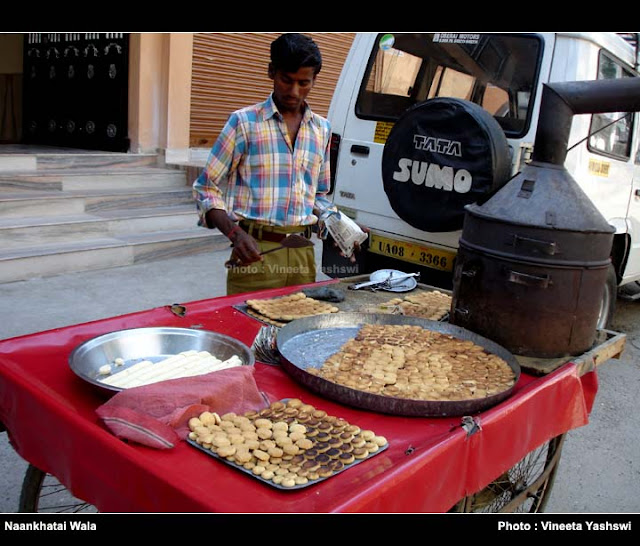 Now again it was mid-day and heat was on top. Though, first we thought to go to Manasa Devi Temple but because of heat strokes we canceled this idea. At evening, we went Her-Ki-Pouri to attended Arti for the final time.  We wander in Ghat, floated diya and then back to Hotel…Next morning we have to start our back journey to Nainital.
Next day we went Her-Ki-Pauri at morning. Ghat cramped badly because of Amawasya. Sun was rising just opposite from Her-Ki-Pouri, and the whole river was bathing with golden rays. Devotees were taking holy dip in Ganga and trying to wash off their sin. We paid our final reverence to the great river and back to bust stand to catch the bus for Nainital…
End
Posted By Vineeta Yashsavi at 17:38 6 comments: