When I was in Pithoragarh – Part 3

After finishing breakfast I went on the roof of hotel and view the city. People were busy for their daily work like going to office, kids were going to school and shopkeepers were busy  decorating their shops to attract the customers, Sweepers were cleaning the roads etc. etc. Everything was going on like a film and as a good viewer I was watching it very seriously. 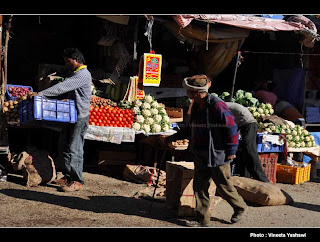 Today I had to go for cave so after spending some time to watch this movie I off  to market where my host will pickup me. This time market was busy with lots activities. I had to wait for my host so I decided to stroll in market. Though the market was small but one can get his daily use things here. Mostly shops were vegetable shops, fruit shops, artificial jewelry shops, small restaurant. I found that everything is available in this small market. After strolling in market I back to the point where my host was waiting for me. With him I got chance to see inner streets of Pithoragarh as well. Well after roaming around we headed to the Chandak again where the cave was situated. It was sunny and little hot also. 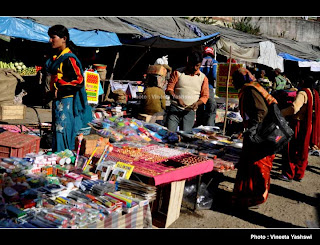 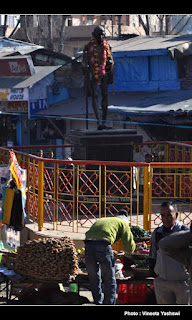 When we were going to our destination, we took another road and went to village called Chhada. View of Himalaya was again stunning form here and the village itself was also very beautiful. It seems that entire village is resting on the lap of great Himalaya.  On the way, we saw a BhimShila but the Shila has broken now. From here first we went to my hosts' shop where I drunk buttermilk and talked with some local people on a silly topic. Then we went to see cave. We have to drive for 3 km. and then we will have to go for a short trek. After half n hour drive we reached to the point from where we had to start trek for cave. 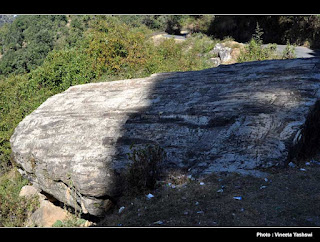 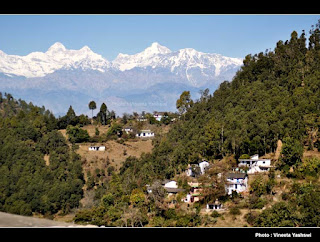 Though the trek was only around 1 km but the route was very exciting. It was going between the dense broad leaves jungle. I felt cold here. Trees were so high that sun rays were not able to touch the earth. Ground was moist and route was interesting and adventures. After some slips and slides we reached at cave point.  Temperature was chilled here and a thin water stream was coming out from the cave which was making ground mucky and more slippery. Well my host handed me a head torch and said – it’s dark inside the cave. Now I was getting more and more curious to go inside so without wasting any time, I went to entrance but before this we took off our foot wear outside the cave. I could feel the chilliness of ground. 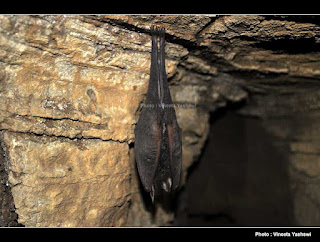 This cave is in under of Archeological department but the condition of the cave is still the same as it was at the time it found. When I entered in the cave I saw a bet was hanging on the wall of cave and he was not bothering about our presence well I did not disturb him and made my way ahead. Cave had three parts. First part was quite narrow and short height that we scrolled to cross this stretch. My head and hands were scratching badly. My head was hitting on the roof of cave. Temperature was chilly here and the path was muddy and slippery. We had to be careful coz it was dark also. Somehow, we crossed first part and entered into second part. In this part, we can walk but had to bend half. This part was again narrow so I had to look forward though I did try to take some pictures. After little walk we crossed second stretch and entered into third part of cave, which was apparently good. Here we can walk properly but this area was badly narrow. We were walking touched our back with caves' wall. Thank god, I am slim enough to walk. When we crossed the area we entered into wide and round area. Here we saw a natural water pond. I saw some statues also, which were looking like Hindu God Shiva and Goddess. I touched the water which was very much cold. On the wall of this pond, I saw calcium layer. I don’t know how much deep we were from the earth that time but that all was sounding like discovery channel. It was very adventures and I enjoyed a lot. After spending some more time we came back. Bet was still resting in his place. I said goodbye to him and came out. (I have no permission to post cave pictures on the internet.)

My clothes had been painted with mud and foot was numb through cold. I did not try to wash off my clothes but try to give some warmth to my feet. I washed off my foot and wore my shoes. I drank the water coming out from the cave and colleting into a tank. 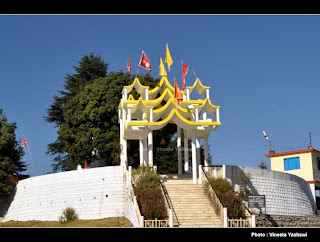 Well after this fantastic time, we turned back. My host told me about Mostmaanu temple which was not far from here. So I went alone there. It says that the Mostmanu was the king of Kumaun region. Every year a fair also organize here. When I was entering into temple, I saw a huge swing was hanging on the veranda. From this swing, a view of Gangolihaat could be seen. Gangolihaat is a beautiful place of this region. Well when I entered into temple I became very upset because the temple is ancient and historical but now cement constriction and white wash was making its ancientness away. It was looking like a hotel more than the ancient temple. Inside the temple effigy of Lord Shiva was situated but there was no sign of any ancient thing, which was really heart breaking… 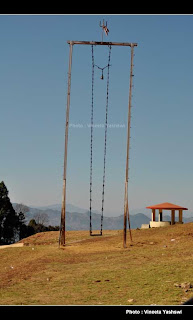 By the time I back to my host shop it was 2 o’clock and in evening around 4 O’clock I have to go for a trek so I decided to finished lunch, which my host had organized for me. When I back to his shop he and his wife was waiting for me for the lunch and my lunch was Puri, Aloo Gobhi ki sabji, Chawal, Rajma ki Dal, Chatni, Dahi. With this delicious food I finished my luxury lunch and back to my hotel.