When I was In Kausani - Part 2


Morning was chilly so nobody wanted to wake-up. We just wanted to spend some more time inside the quilt but after some sluggishness, I woke up and came out. Himalaya was awesome but still covered with clouds. I went for little walk inside the rest house campus. No one was seen their, except some foreigners. Well I enjoyed those moments with myself and after a short walk; I came back and ordered for coffee and breakfast.

By that time my other friends also had been woke up. After breakfast, we made our plan for the day. We wanted to explore Kausani as much as we could in a single day. We got ready by the 11AM. Rest house manager told us that we can go to some places, like – Ansakti Ashram, Sumitra nanadan Pant Museum, which are inside the market and we also can go to Rudradhari Temple. He said – but for this temple, we will have to go by taxi and after drive, we would have to trek almost 3-4 km. we all were trekking lovers so decided that we'll go to this temple. Now It was sunny and view of Himalaya was clear. Kausani was in different mood.

When we reached market, first we went to Anskati Ashram. It was clean, calm and quite. Anskati Ashram is a place where Gnadhiji came in 1929 and wrote his Anaskti Yog. This place has well managed. Here you can find so many things about Gandhiji. One prayer hall is also here where we sat for a while. It was a nice experience for all of us. When we were returning from here, we felt very peaceful. After Anskati Ashrm we went to the Sumitranandan Pant Museum. Sumitranandan Pant was a great poet of kumaun. His Ancestral house is here which has converted in to the museum. His desk, his books and so many other things are here but the condition of this museum was very pitiable. 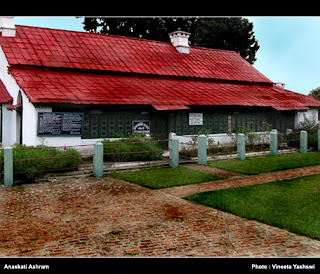 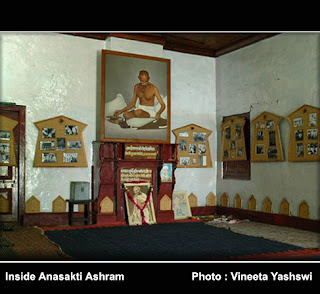 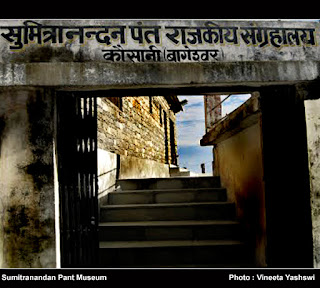 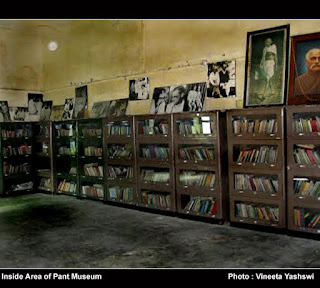 Some temple was also in the market and after roaming around here, we went in a shop to ask for a taxi for the Rudradhari Temple. He arranged a taxi for us and suggested to take guide along because temple was far from the road and jungle is very dense where we can easily get lost. First, we thought that he is making us fool for some extra bucks but when other people also advised the same, we decided to take a guide. After 1-2 hours taxi dropped us at trekking point, now it's trekking time. With our guide, we moved on. 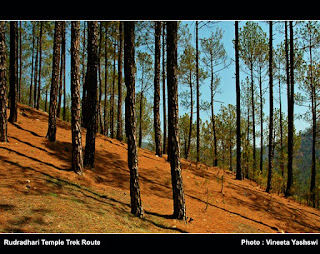 It was truly a dense pine forest. Our decision of taking guide was right and the village people were actually trying to help us. Route was very hard-hitting. Some time it was going downward and then abruptly, it was going upward. No doubt, any stranger can easily get lost here. Overall, we were enjoying this trekking. A rivulet was also there in jungle but the water level was low perhaps it would be monsoon rivulet.

Well after this interesting 3 hours trek, we were at the Rudradhari Temple. We saw a huge waterfall there. May the water would be coming from the same rivulet, which we saw in jungle. We were little exhausted so could not stop ourselves from going inside the pond in front of waterfall. We were trying to go deep in this pond but our guide stopped us. He said – it's very deep there so don’t go there…could be dangerous. We turned back, set on the bank of waterfall and our feet were inside the water. 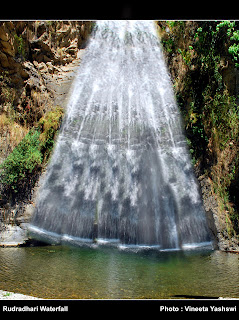 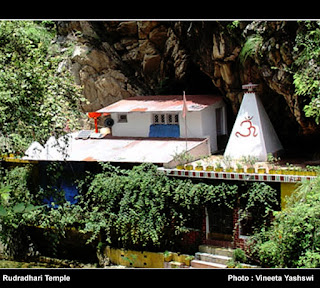 After some relaxation, we went inside the temple. It was Shiva temple and one Shrine was also there but guide could not tell us much about the temple. He only said – one baba ji lives here but that time he was not there. When we were returning, I saw women carrying grass bundle on their head. It was something, which always makes me feel very sad. I suddenly said – Our villages are still alive because of these hard working women, Real example of Nari Shashaktikaran. Guide said - Yes, you are right. Men do not do anything. They play cards and drink, which has become a biggest problem now and those who are little literate they are migrating in big cities for work. Only women, kids and old people left in village and women have to take all responsibilities of their house and agriculture. We realize, our guide is a nice and emotional fellow. He sang a folk song and no doubt, his voice was very sweet.

When we were on the road, we decided to go further on the road, which was going into the village. When we were on the way one cow came in front of our car and got scared. She started running frantically here and there. We thought cow could fall down so we back. We spent a beautiful day and exploring day but now time to take food. We went in a hotel… had rice and dal and then walked back to rest house. This time again, we had tea in a same restaurant. Though, we explored a lot but get exhausted also. Evening time we took a small walk to the restaurant, had tea and back. After dinner, we went into the bed.

Next morning we had to back. We wanted to stay there for some more days but time was a big problem. May be one day we will go there again to spend some more time…

End…
Posted By Vineeta Yashsavi at 15:35

Email ThisBlogThis!Share to TwitterShare to FacebookShare to Pinterest
Labels: My Travel Notes From Kausnai